Skip to content
With the development of artificial intelligence and IoT technology, we are seeing the proliferation of smart devices. Around us, there are new smart equipment categories such as smart speakers, early education robots, and sweeping robots. At the same time, in the fields of smart industry, smart city and smart retail, the pace of intelligence is also moving forward. We have seen that under such a development trend, the traditional MCU chips are undergoing profound changes and are developing in the direction of intelligence.
Intelligent Internet of Things and MCU intelligence
The rise of this wave of artificial intelligence originated in big data and deep learning. With the development of the Internet, human society has generated a large amount of data, and big data and deep neural network algorithms can train some highly accurate machine learning models, which can stimulate new applications such as face recognition, automatic driving, and speech recognition. In the artificial intelligence based on big data, the terminal node is responsible for collecting data and handing it over to the cloud. The cloud server repeatedly iteratively trains high-precision models and finally deploys these models into the application. It should be said that the tasks of data collection and model training are currently recognized in the terminal and the cloud respectively, but the specific deployment of the machine learning model is different in different applications.
Some applications (such as camera content analysis) are deployed in the cloud, that is, the terminal completely returns the original data to the cloud, and the cloud performs the deep learning model reasoning on the data, and then sends the result back to the terminal, and the terminal according to the cloud. As a result, the corresponding operation is performed; in an application such as automatic driving, the model must be deployed at the terminal, that is, the terminal performs local reasoning of the deep learning model after collecting the data, and performs corresponding actions according to the result. In a scenario such as the smart industry that needs to perform deep learning model reasoning in the terminal, the MCU originally used to perform the relevant action must be able to support such deep learning inference calculation, which is the intelligentization of the MCU.

In general, the reasons why machine learning models must be deployed at the end of the terminal include transmission bandwidth, latency, and security. Considering the transmission bandwidth, the nodes in the Internet of Things are currently distributed in various scenarios. If the original data is to be directly transmitted to the cloud, the bandwidth overhead is very large, and the energy cost of wireless transmission is not small. If you deploy machine learning reasoning on the terminal, you can save bandwidth overhead, and only need to selectively transfer some important data to the cloud without transmitting all the original data.
Reaction delay is also an important reason to deploy deep learning at the terminal. At present, the data transfer time to the cloud is usually in the order of hundreds of milliseconds, which is not satisfactory for applications such as industrial robots with high requirements for delay. Even in a 5G low-latency network, the reliability of a wireless network is difficult to meet the demand for high-reliability applications such as smart industries. Occasionally high latency or even data loss can cause problems in machines that require immediate response. Therefore, it tends to choose to put the calculation of deep learning reasoning locally.
Finally, data security is also a consideration. For some sensitive applications, transmitting data to the cloud server over the network means that there is a risk of data being compromisedâ€”if the hacker controls the entire factory by cracking the data of the smart factory and the cloud server. It will bring huge losses to the factory â€“ and it would be safer to put these calculations locally.
According to the above scenario, we believe that the MCU that needs to perform local machine learning inference calculation mainly runs in the following scenarios:
Intelligent production requires rapid response and attention to data security, such as identifying machine faults based on sound;
Small robots, no one will hope that once the robot is disconnected from the network, it will not work, such as drones, sweeping robots, etc.;
Smart home appliances, such as smart air conditioners, are intelligently supplied according to the location of the person;
Intelligent wearable devices, such as giving corresponding prompts according to physiological signals of the human body.
With the above-mentioned requirements for performing machine learning inference calculations in terminal deployments, some MCUs that were originally only responsible for executing basic programs must also have the ability to run machine learning inference calculations. The challenge for MCUs lies in computing power, because in this wave of artificial intelligence, the amount of computation required to train a good model is usually hundreds of thousands of calculations to hundreds of millions of calculations, if you need to perform these operations in real time. Then the computing power required by the MCU will be several orders of magnitude stronger than the original MCU.
In addition, smart MCUs also have high requirements for power consumption and real-time performance, which requires MCU design to change accordingly. At present, the MCU is in the process of upgrading from 8 bits to 32 bits. We expect that based on the 32-bit MCU, intelligence will become the evolution direction of the next MCU.

Intelligent Technology Path 1: Integrating Accelerator IP
At present, in the field of MCU, ARM has occupied the position of leader, and its IP has occupied a large market share. For the rise of intelligent MCU, ARM naturally will not stand by, but play a role as a promoter to help the MCU achieve intelligence.
ARM's Cortex series architecture dominates the 32-bit MCU, so ARM's approach to advancing intelligent MCUs needs to take into account its Cortex architecture, and it is not possible to push its own life in order to push the results of intelligent MCUs. Therefore, ARM chose to equip the Cortex core with a separate accelerator IP, which is called when the machine learning related algorithm needs to be executed, and Cortex is used as a traditional operation.
ARM's machine learning accelerator series, Project Trillium, includes hardware IP such as machine learning processor (ML Processor) and object detection processor. It also includes algorithms for optimizing execution on these accelerators and Cortex cores and Mali GPUs. Software stack ARM NN. Take the ARM ML Processor as an example (as shown below), its architecture includes an acceleration engine Fixed-function Engine for accelerating dedicated functions, a programmable layer engine for speeding up the neural network, Programmable Layer Engine, on-chip memory for controlling accelerator execution. Network control unit and DMA for accessing off-chip memory.
The ARM ML Processor is a typical accelerator architecture. It has its own instruction set and can only perform computational acceleration related to machine learning and cannot run other programs. Therefore, it must work with the Cortex core. The ARM ML Processor can realize the power of 4.6TOPS, and the energy efficiency ratio can reach 3TOPS/W. The performance is excellent. For the occasions with low computing power, the power consumption can be reduced to reduce the power consumption to meet the needs of the MCU. 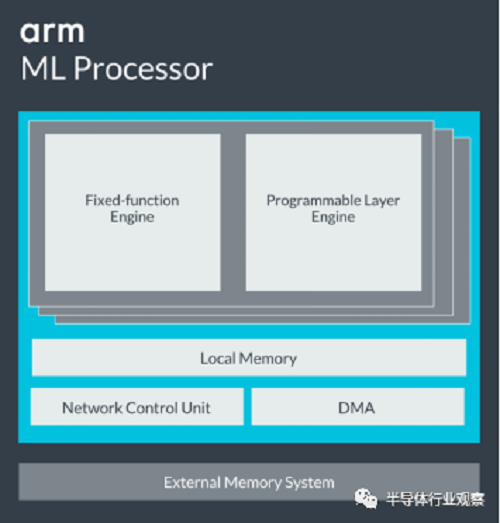 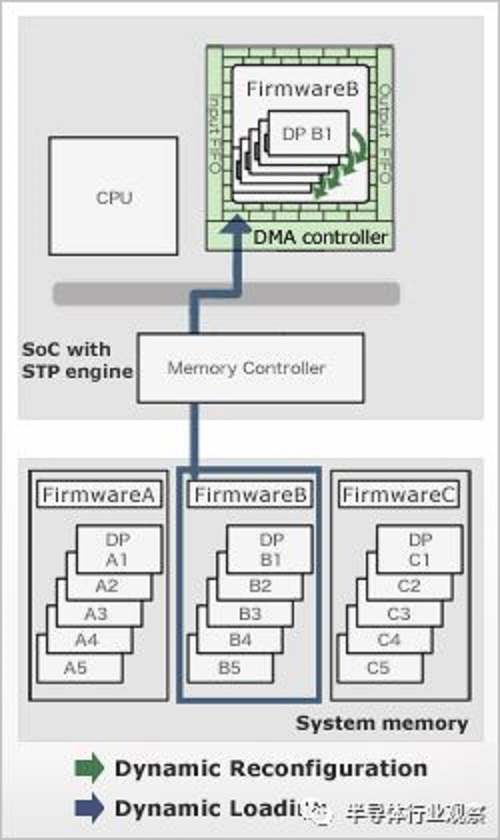 Conclusion
The combination of artificial intelligence and the Internet of Things advances the concept of intelligent MCUs. We expect to see the popularity of smart MCUs in the next few years, and the choice between the two technology paths of smart MCUs will not only affect the MCU market, but will also have a profound impact on the semiconductor ecosystem â€“ if dedicated accelerator IP If you win, ARM will continue to be the leader of smart MCUs, and if the new architecture wins, ARM will face strong challenges.