After the conventional roasting method was restricted due to serious environmental pollution, the new type of no-poor roasting roasting technology was gradually developed in the late 1980s, and it became a competitive process. Among them, the carbon-containing ore was best treated by roasting. .

The world's first cycling gold ore for boiling roaster former West Germany Lurgi (Lurgi) Chemical Metallurgical Company based on their roasting alumina calcination technology cycle design, built in 1989, Kalgoorlie gold mine in Australia Put into production. The design capacity is 575t of 33.3% gold concentrate with daily processing. The process can achieve non-polluting roasting, high removal rate of S and C, good quality of calcining, low investment and operating costs, and rapid application in the United States and Canada. In the United States alone, in 1990, four ore-scale roasting plants with a scale of 1,000 to 7,300 tons were built.

The sulfur-fixing and arsenic roasting technology is the result of more than ten years of research in the United States. It uses the calcium, magnesium or slaked lime contained in the ore to make the SO 2 and AsO 3 formed by roasting oxidation mostly combine with calcium and magnesium to form a non-volatile salt and remain in the calcine, which can make S in the flue gas. The concentration of As oxide is reduced to a very low level and the pollution is small. The first solid sulfur and arsenic roasting furnace that has been built is the Cortez gold mine in the United States. The deposit is a dolomite-containing carbonate mine, and the ore contains S 1.5%, C 1.0%, and As 0.12%. Since the raw ore contains low S and As, the roasting operation can only use the dolomite in the ore to fix the S and As in the calcined sand without additional lime.

The Central South University of Technology conducted a small-scale test of solid S and As roasting of concentrates containing higher S and As. The concentrate used contained S 6.23%, As 3.76%, C 3.83%, Ca+Mg 0.05%, and Au 23.3 gâˆ•t. After calcination at 650 Â° C for 1 h, the amount of lime was 1.1 times the theoretical amount, and the fixation rates of As and S were 99.99% and 86.90%, respectively. The calcination was leached by cyanidation, and the leaching rate of gold was 89.60%, which was 32.64% higher than that of uncalcined concentrate. Another test proves that CaSO 3 is partially formed when the calcination temperature is lower than 600 Â° C, so the process temperature should be controlled at 600 to 650 Â° C. When roasting certain ores by this process, it is also found that sulfur and lime can form calcium sulfide having a certain solubility, which adversely affects the cyanidation of the calcine, and needs to be removed before the cyanidation. In view of the high rate of polysulfide leaching of gold, the reagent is basically non-toxic, and CaS does not affect the leaching of gold, and if necessary, it can be leached by polysulfide method.

The continuous vibration vacuum distillation roasting test device was jointly developed by the Institute of Mineral Processing and Metallurgy of the Kazakh Academy of Sciences, the former Institute of Rare Metals of the former Soviet Union and the Central Asian Nonferrous Metals Scientific Research and Design Institute. It was used for flotation and re-election of a gold mine in Siberia. Calcination test carried out in an arsenic-containing gold concentrate. The processing capacity of the device is 2.2tâˆ•dÂ·m 2 . The raw materials are re-selected high As, C, S concentrates, containing S 32.44%, As 15.90%, C 4.85%. The re-elected concentrate was treated at a temperature of 700 Â° C and a negative pressure of 40-100 mmHg (5.23 to 13.33 kPa) for 1.1 t, and the produced distillation roasting texture was loose and a certain degree of fine crushing was obtained. The calcine yield is 69.3% of the concentrate, the gold recovery rate is 99.8%, the As content is less than 0.67%, and the total volatility of As is 97%. After three levels of cyclone dust collection, the soot yield is 2.62% of the concentrate, containing As 0.83% to 11.2%. The yield of flue gas condensate is 19.30% of concentrate, containing As 70.20%, S 28.70%, it is yellow powder, and its chemical composition is similar to that of realgar. The ton concentrate consumes 400 to 500 kW.

Tests on flotation of As 1.80% concentrates have also yielded similar results.

The Institute of Mineral Processing and Metallurgy of the Kazakh Academy of Sciences later used a 5t continuous vibration vacuum distillation roasting unit to conduct semi-industrial tests on As 7% to 12% gold concentrates produced in Kazakhstan and Yakutia. The calcine contains As 0.15% to 0.6%. The calcination was carried out by cyanidation, carbonic acid leaching and fine grinding, respectively. The recovery rates of gold and silver were not high. After which the copper concentrate smelting matte together, gold recovery rate of 95.4% ~ 98.4%, 94.4% of the silver also.

The arsenic gold concentrate produced by a gold selection plant in the former Soviet Union has a particle size of 70% -0.074 mm (200 mesh), including As 6.7%, S 12.3%, and Au 96.5 gâˆ•t. Since the gold particles are very fine, they are further ground to 97% -0.074 mm (200 mesh) and then cyanated. Because of the low leaching rate of gold, the leaching time was once extended to 144 hours, and the gold leaching rate was still less than 86%. By then add salt and adopt measures to test lead low alkalinity and other indicators are not ideal.

In order to improve the recovery rate of gold, an oxidation-vulcanization roasting pretreatment test of limited air supply was carried out. After the concentrate is granulated and dried, a limited amount of continuous blast roasting is carried out at a temperature of 620 to 650 Â°C. Since the concentrate is first granulated, the amount of blasting is small, and no dust is blown out during roasting, and the yield of slag is 87% to 89%. The arsenic removal rate was 95.02%, and the slag contained 0.38% arsenic. Gold is fully enriched in the slag, and the grade is increased by 11% to 13%. Because the job is fired autothermal sulfide, the test was measured continuously when the air requirement of different firing temperature (550 ~ 730 â„ƒ), the results of which meet the following overall reaction formula, and appropriate increase in the air excess pyrite oxidation The amount needed.

After testing, the air is supplied in a calcination amount, and after the sublimate is collected by condensation, the volume ratio of the substances contained in the exhaust gas is 9.5% of SO 2 , 4.8% of CO 2 , and 85.7% of N 2 , and the total of the three is 100%. The oxygen in the human air has been fully utilized. The collected soot contains all arsenic, which is slightly toxic and does not contain arsenic anhydride.

Oxygen-enriched calcination usually uses two-stage calcination with a high concentration of oxygen containing 80% to 100% of oxygen, and the total calcination time of the material is 10 to 16 min. It can control the supply of oxygen to achieve low temperature and strengthen the oxidation of organic matter. In the first stage firing process may also be added an appropriate amount of pulverized coal to reduce the oxygen consumption and to prevent sintering calcine. Because the amount of air fumes that are not blown into the air can be minimized, the concentration of SO 2 is increased, which is advantageous for acid production.

Flash calcination is a rapid roasting technology for ores such as bauxite, limestone, etc. In recent years, people have tried to use it for the roasting of gold ore and gold concentrate. The flash furnace is a suspension air entrainment operation system, and the continuously supplied raw materials directly fall into the high-temperature hot air flow sprayed from the nozzles, and are fired in the fast-flowing hot air bearing movement. The added material can be calcined in just a few seconds.

Rooftop Packaged Unit for rent is popular in the market, its advantage as bleow: 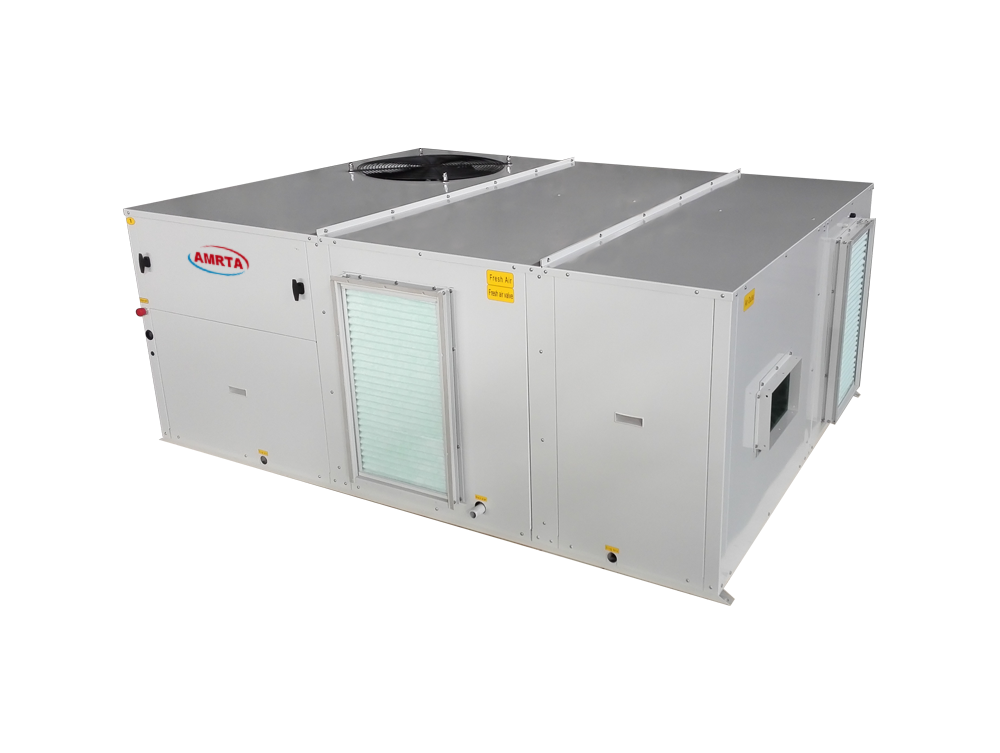